The Fatal Voyage of Pourquoi Pas? 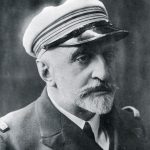 The respected french scientist Dr. Jean-Baptiste Charcot (1867-1936) was leader of the French Antarctic Expedition. He was captain of the ship Français while exploring Antarctica from 1904 until 1907. His next ship was the 3 mast bark Pourquoi Pas? The ship was built in St Malô, France, in 1908. It was heavily reinforced and used for polar exploration. Charcot had often stopped by in Reykjavík on his expeditions and had good friends there, such as Þóra Friðriksson. She had lived in France and was very familiar with its language and culture. 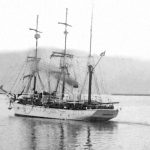 At the beginning of September 1936 the Pourquoi pas? was on its way from an expedition to Greenland and stopped in Reykjavík for repairs. On the afternoon of September 15th, the ship left Reykjavík, heading for France with a scheduled stop in Copenhagen. Shortly after they set sail a huge storm hit them, throwing the ship on a reef by Straumfjörður in Mýrar so violently that the ship sank. The Icelandic farmers of Straumfjörður rushed through the storm as soon as they saw what had happened, in order to rescue what and whom they could. A young man, Kristján Þórólfsson managed to get a sailor by the name of Eugene Gonidec out of the heavy seas, but he was the sole survivor of the 41-man crew. Captain Charcot, the famed explorer, went down with his ship.

A memorial was held in Reykjavík after the accident as the shipwreck had caused great sorrow in Iceland.

In the 1960s, the wreck of Pourquoi pas? was rediscovered by a diving team. A monument to Jean-Baptiste Charcot and his crew was later erected at the site of the shipwreck, in Straumfjörður. The district Borgarfjörður is regulary visited by Charcot´s grand-child madame Vallin-Charcot in the memory of her grandfather.

Even though this tragic event happened more than 80 years ago, it will long be remembered in Borgarfjörður.